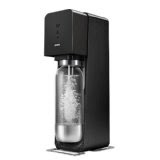 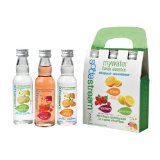 First, I would like to start by saying that I usually am not a soda drinker; however, I do enjoy drinking fresh, carbonated water with a touch of lemon or lime. Prior to receiving The Source by SodaStream as a gift, I used to buy flavored and non-flavored varieties of carbonated water on a weekly basis, which was very inconvenient and expensive, but now I can make my own carbonated beverages at home for just pennies a serving!

The Source by SodaStream is a specially designed appliance that makes delicious soda or sparkling water in the comfort of your own home using regular tap water.  It can be used several times a day, is available in the colors white or black, and comes with a carbonating bottle that fits and locks into place in the front of the machine. The CO2 canister fits and snaps into place in the back of the machine and you can gauge the strength of how much carbonation you use by the LED display that is visible on the front of the machine.

What I really like about The Source by SodaStream is that it does not need to be plugged into any wall outlet, which means that it is easily portable, and can be used at home or be taken anywhere. Simply set it on a flat surface and make great tasting carbonated water without the hassle of cords or electrical outlets. All that’s needed is some water!

I was also given as a gift many SodaStream flavorings, such as- Diet Ginger Ale, Diet Cola, Energy Drink, Cranberry Raspberry, Ginger Ale, Root Beer, Lemon Lime, Black Currant and Pear, Pink Grapefruit, and Sparkling Naturals, which are water flavor essences- Orange, Mint, Raspberry, and Lemon–Lime, which are my favorite flavors, because they contain no artificial ingredients and no added sweeteners.

It is so easy to make carbonated beverages in less than 30 seconds using The Source by SodaStream, simply place the CO2 canister into the back of the machine, fill carbonating bottle with water up to the designated “fill” line, place the carbonating bottle into the designated area on the front of the machine, it will lock into place, and push down on the top part of the machine to dispense the carbonation.  There are three indicators on the front of the machine that light up individually to show how much the beverage is being carbonated and when the third light appears, the machine gives out a small screeching sound, which means it has achieved the highest level of carbonation. After the process has been completed, remove the bottle from the machine, and there will a sound that resembles the sound of a bus door opening. I think the sound is caused by air pressure, but I like to hear it.

The reason why the bottle has a designating line is so that if you want to add any Soda Stream flavoring (sold separately), it can be added without causing the carbonated water to overflow from the bottle. The carbonation bottle also comes with a cap, so the beverage can be placed in a refrigerator for future use.

Depending on how much I use the soda maker, I can expect to replace the CO2 canister after 3 to 4 months of regular use and each carbonator makes approximately 60 to 130 liters of soda or sparkling water.

Also, I can help reduce harmful CO2 emissions and help the environment every time I make sparkling water or soda at home instead of buying it from a store because it is a green product.

If I could give The Source by SodaStream a rating between 1 and 5 stars, with 5 being the best, I would give it 5 stars, because it is easy to use, has a great design, is portable, and makes great tasting sodas and sparkling water that, in my opinion, tastes much better than store bought ones. I really like this machine, have used it many times, and each time, SodaStream gives me exactly what I have been looking for so long…great tasting and fresh carbonated water at my fingertips.

You can find The Source by SodaStream at many stores throughout the country, including at Target for $129.00.

Disclosure of Material Connection:
The Contributor has no connection to nor was paid by the brand or product described in this content.

rejoice4life
Philippa Lane is a professional freelance writer and is a staff member of the Cable Muse Network. She is a prolific writer and covers a variety of subjects, such as health, beauty, appliances, travel, food, books, and automotive topics. She loves Jesus and is a mother of a beautiful daughter. Take a look at some of her articles on www.plglobalreviews.com and http://ezinearticles.com/?expert=Philippa_Lane http://tinyurl.com/4o8a3h2